LEE DARROW is a native of the Chicago area. Born and raised in Oak Park, Illinois, he graduated from Oak Park High School, went on to study at Triton Community College, Northeastern Illinois University and Eastern Michigan University. 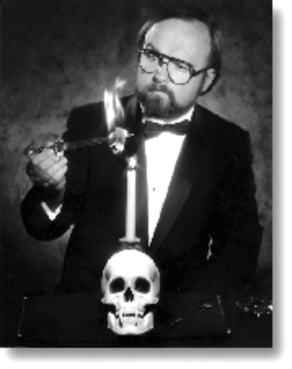 LEE has trained in hypnosis with of Mindsight Consulting, Mike Brown and Steve Lankton at Spectrum Psychological Services in Ann Arbor, Michigan and later earned his certification as a hypnotherapist with the National Guild of Hypnotists through MindSight Consulting, under the tutelage of George and Paula Baranowski.

LEE did his first hypnosis show at a local coffee house in Oak Park, IL in 1969. In early 1973, LEE began his career as a hypnosis lecturer and Research Associate with the Illinois Center for Parapsychological Research at Northeastern Illinois University, where, among other things, he developed an interest in sleight of hand magic. He has been a presenter on hypnosis and/or magic at conventions including the International Transactional Analysis Convention, the American College of Physicians and Surgeons and the First World Congress on Neuro-Linguistic Programming. LEE also has done several promotional stunts, including one recently for the Woody Allen/DreamWorks film, The Curse of the Jade Scorpion!

LEE’s first magic show was done when he was about five years old. His grandfather, Kenneth Darrow, was an avid amateur magician and LEE caught the bug from him. But, as the years went on, LEE moved away from magic until his late teens, when he met the legendary Heba Haba Al (Andrucci) at the equally legendary New York Lounge in Chicago. LEE learned magic from Heba Haba, Skeets Mallun, Tony Andruzzi, Michael Ammar’s seminar and with many other of the top magicians of our time. His specialty is close up magic, but he is equally at home in front of hundreds at after banquet programs and trade show booths. LEE's comedic style and strong presence adds powerfully to any message your firm might want to deliver.  LEE has been the Official Magician to Medieval Times Dinner & Tournament in Schaumburg, Illinois, since 1994.

•  Midwest Hypnosis Convention's Originality Award for innovative techniques in hypnosis.
•   President to the International Brotherhood of Magicians Ring 210 in Ann Arbor, Michigan in 1977.
•   Invocation Magazine named an issue for LEE DARROW and featured his magical creations (1989)
•  Lee's original mentalism and bizzare magical effects have been featured in first three issues of the new magical publication Magic Over Mind.